The Peel plugin lets you roll or peel any object. For doing a traditional peel on a flat object, we recommend you use the High Mesh 1 object in the Basic Shapes folder. 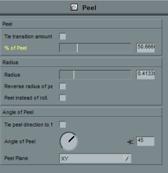 When checked (the default), the peel amount will automatically be tied to the total transition time, so that the object will peel over the entire time of the transition. Clear this checkbox to keyframe the peel manually over time.

When Peel % From Transition is cleared, you can use this slider to manually control and keyframe the amount of peel over time.

This slider controls the â€œsizeâ€ of the roll. The larger the number the bigger the roll.

When checked, the peel will be behind the object rather than in front.

Peel Instead of Roll

When checked, the plugin will peel back the object rather than perform a roll.

This spinner controls the direction of the peel.

This determines which 3-dimensional plane the peel â€˜rollsâ€™ across. For a flat object like High Mesh 1, you will usually leave this set to the XY plane. For other objects you may want to switch to different Peel Planes to see the result.