Hollywood FX includes an easy-to-use 3D text generator. This feature is best used within the Filter format of Hollywood FX. It allows you to create text that is extruded in 3D with bevels. You can assign different colors to the sides, face and bevel edges of the text. You can also generate the text as a single block or with each letter being itâ€™s own separate object. This tutorial will demonstrate the use of 3D text in its most common uses. Unlike more limited effects software, Hollywood FX allows you to attach a warp plug-in to 3D text, so you could even explode your text or have it surface-wipe away.

Prepare for the tutorial:

1.      Create a new project in your host application and put on clip in the timeline so that it can have a filter attached to it and make sure it is set for Alpha Channel transparency.

3.      Within Hollywood FX select New from the File menu.

To applying the 3D Text plugin:

The 3D Text Options will show above in the Properties panel.

2.      Select the yellow Font folder to choose another font style. 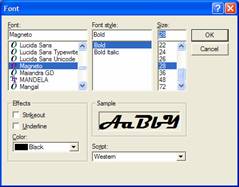 3.      Now change the colors of the text by selecting the four color sides.

3D Text color buttons for each side of the text

4.      Next we want to apply a preset flight path and watch our word fly off the monitor. Move down the Album Tree to the Presets Album.

You can change the word any time by selecting the 3D Text plugin attached to the 3D Text object. You can also apply plugins like Explode and make your 3D text blow apart. Experiment and have fun with this valuable tool of Hollywood FX.