The Export HFZ tool is designed to let you easily share your custom creations with other Hollywood FX users. When you export an effect as a .hfz file, Hollywood FX compresses the effect itself, along with any of your own objects and images that are used in the effect.

There are two important rules when using Export HFZ:

Â·    You cannot export any of the original effects that come with Hollywood FX. Export HFZ is for exporting your modifications and custom-created FX only. If you modify an existing effect, you must first create a new Preset by dragging-and-dropping the FX item from the FX Tree into the Album.

To export a modified or custom-created effect:

2.      A file requester will appear asking you to name the .hfz file. Change the default name and location if desired, then click Ok to create the .hfz file.

The .hfz file name will default to the name of the effect. Export HFZ will create .hfz files in the Hollywood FX\Share folder by default.

Export HFZ in File Menu (L) Save As requester (R )

To install a .hfz file on any system with Hollywood FX 4.6 or higher:

Â·    Double-click on the icon of the .hfz file. The HFZ Installer will load and install all of the files in the .hfz file. Click Ok to close the dialog when finished. 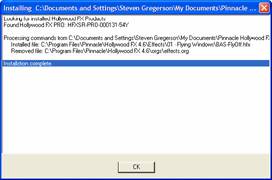 The Export HFZ file requester and the HFZ Installer