Hollywood FX includes a number of 3D plugins called Warps. These Warps mathematically change the shape of a 3D object and can be keyframed over time. This tutorial will demonstrate the use of one of the most common Warp plugins called Peel. Unlike more limited effect software, Hollywood FX allows you to attach a Peel to any object (not just a flat plane) and allows you to attach multiple peels to the same object.

Prepare for the tutorial and select the FX:

2.      Add two video clips and create a two second transitions between them.

3.      Add Hollywood FX as a transition between the two video clips.

4.      Select the Specialty Effects album from the Album Tree

5.      Select the PROWarp Template FX for the Specialty Effects album.

Note: The Warp Template FX contains a high-polygon object, ready for use with Warp Plugins, and has no motion.

To attach the Peel Plugin:

2.      Click on the Warps and then Plugins icon in the Album Tree.

3.      Drag the Peel plugin from the Album and drop it on the High Mesh 1 object. The dialog will appear.

You should immediately see that the object has peeled. By default, the Peel time is keyed to the total transition time, and the direction of the Peel is tied to the Flight Direction spinner (under Effect Options). This makes it simple to quickly add a Peel to an effect. Most plugins work this same way, providing default options that make it easy to quickly get the results you want. 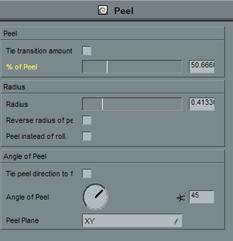