This tutorial will take you through the basics of selecting a Transition FX and setting Effect Options.

To prepare for this tutorial: Set up two video clips in your host application and add Hollywood FX as described in Getting Started. When the Hollywood FX window appears, you are ready to begin. 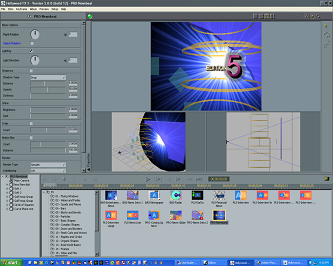 The Hollywood FX window is organized into panels and menus. The first panel is the Properties panel (by default this panel may be closed upon first use after install). This is where all detail controls are found.

The second panel is the Monitor panel that displays the preview of the current FX (the above image shows the monitor selected in Tri-View mode).

Finally, the lower half provides access to the Album folders. One is for selecting property controls for Objects, Plug-ins, Media, Camera and Lights. The other is for selecting from the many categories of FX.