The Monitor panel and associated controls

The Monitor panel provides a preview of your chosen FX and options. The preview is generated on the fly as you make changes. A number of controls are provided to adjust the preview itself. 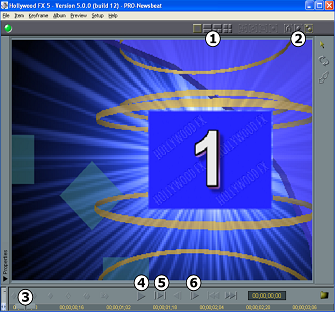 The Reverse Effect button is a real time saver. It allows you to reverse all flight directions with one click. So now your video window will fly on, instead of flying off..

Click the single playback button to play the entire transition one time. This is useful when youâ€™ve made some changes and want to see the entire effect quickly.

Jump to the beginning frame of the effect or to the last frame in the effect.

Normally, the preview shows the view from the camera in the FX. The camera view is what is used for rendering the actual FX. Sometimes, particularly when editing an objectâ€™s flight path, you will want to see the other views of the FX from at different angles. These buttons allow you to see multiple views, such as side, top and perspective.

These buttons allow you to switch between Proxy, Still and Actual. Actual shows and update of the video from the timeline, but will slow down performance.

These buttons allow you to change the way the multiple views display. You can change a side view and rotate it to a perspective angle, then zoom out or move it off center to gain a better editing view.

The timecode counter shows the current position of the FX in conjunction with its Hostâ€™s timeline.

Use the Select button to click in the various areas you want to edit.

The Flight Rotation button is a quick way to rotate the flight path of the transition object.

The Light Direction button is a quick way to change the FX scene is lighted. You can easily create a creepy FX by simply changing the light direction to shine upward from below.

This means that the FX will preview in Real-Time and Final Render will be considerably fast.

This means that the FX is more complex than the hardware can handle. It will have to render its Preview and Final Render time will be slower.

The Monitor panel and associated controls